travFACTS’ mission is to expose exaggerated or flat out misleading travel “news” that is consistently put out by media outlets. This June 18th Complex article aims to tie together all of the recent deaths in the Dominican Republic without providing any hard proof.

Instead, it uses nameless sources and other media reports to validate its exaggerated theories. 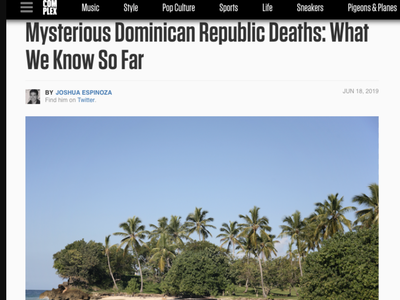 Headline: Mysterious Dominican Republic Deaths: What We Know So Far

When you see phrases in a story, like “many have wondered,” and “according to several reports,” you know that the reporter didn’t get this information on his own. There is no specific attribution to any of the author's claims.

Now, a general attribute like “according to several reports” is not an uncommon practice, but it is dangerous to use when reporting on matters as sensitive as these.

The story goes on to say, “The suspicious deaths of U.S. tourists in the Dominican Republic have ignited growing concerns about travel safety.”

No, media reports like this one with no hard proof to support wild speculation is what has “ignited growing concerns about travel safety.”

The article also mentions a situation in which graduating seniors from Oklahoma got sick after eating at a restaurant inside the Hard Rock Hotel & Casino Punta Cana, where they were staying for a class trip.

According to the piece, “’We just don’t know what is happening,’ Liz McLaughlin, mother of one of the affected students, told the New York Post. ‘Is it the water? Is it the ice? Is it the food? Is it the food handling? Is it the pesticides?’”

In countries like the Dominican Republic and Mexico, water and ice have been getting tourists sick for decades. If that even is this case here – and even this theory is a stretch since most reputable hotels like the Hard Rock Hotel & Casino Punta Cana make sure to only serve pure water – what does this have to do with the tourist deaths in the Dominican Republic this year? This is yet another publication that is combining deadly and nonfatal incidents into one story.

Complex continues on by suggesting, “It's also worth noting that tourism makes up about 17 percent of the country's economy, which explains why officials have seemingly dismissed theories of foul play.”

This is an awful accusation. The author has no proof behind his claims that the country’s officials are covering up American tourist deaths to keep their tourism numbers up to speed. Perhaps the country’s officials are seemingly dismissing theories of foul play because no toxicology reports have been released yet, and they do not want to jump to conclusions like some consumer media does?

According to Complex, “The Dominican Republic has been rated a level 2 out of 4 on the U.S. State Department's Travel Advisory alert system. The ranking, which the country has held since spring 2018, warns visitors to "exercise increased caution" in wake of violent crimes in the country.”

The story does not mention that level 2 is quite common. In fact, a level 2 advisory is the same as other Caribbean hot spots, Jamaica, Turks and Caicos, Trinidad and Tobago, the Bahamas and Cuba. This level 2 advisory has been in place since April and hasn’t changed, despite the negative reporting.

Here’s what he had to say.

“It was very normal,” said Medina. “That was my sixth stay or so at Hard Rock, and the only difference was they removed the full-size bottle dispensers from the rooms. That didn’t bother me since I rarely use them, and they had a bottle of wine, plus the usual canned beer, soda and water in the minifridge.”

And because of his first-hand experience at the hotel, he was able to convince a wedding party not to cancel their trip due to sensationalized media reports.

“I also had a wedding group of 70 guests in early July, shortly after the media fire, at Hard Rock,” said Medina. “They were so glad they didn’t cancel after I went and told them about my experience, and everyone loved it. It was a beautiful wedding and there were many happy guests.”