travFACTS’ mission is to expose exaggerated or flat out misleading travel “news” that is consistently put out by media outlets. The June 19th Woke America article featuring a video demonstrating “tainted” alcohol is a reminder that bogus news is even more dangerous when it is enabled by social media. 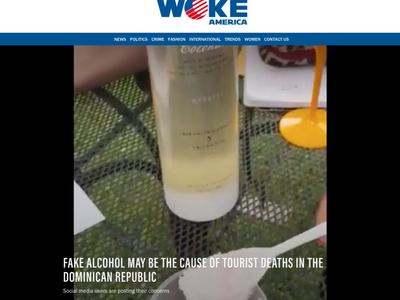 Headline: Fake Alcohol May be the Cause of Tourist Deaths in the Dominican Republic

The article relies on an amateur video shot in someone’s backyard in an unknown destination as it’s main evidence that drinks “May be the Cause of Tourist Deaths in the Dominican Republic,” as the headline claims.

In the video, the contents in a bottle of Ciroc vodka are stirred until it becomes a thick, pasty substance. While this bottle is said to be a cheap knockoff of the brand, the article never even says whether legit Ciroc is even served at Dominican Republic resorts.

According to Woke America, “While this video is shocking, there have been official toxicology reports confirming a direct link to tourist deaths.”

We are going to give the author the benefit of the doubt and assume “have” in the first sentence is a typo, and should be, “haven’t.” After all, there have been no official toxicology reports released to date. This is an extremely dangerous error that most readers might not catch and treat as fact.

The article goes on to flat out admit that there is no connection between the video and the incidents in the Dominican Republic.

Ciroc is a brand of vodka that is produced and distributed by the British-based multinational alcoholic beverage maker Diageo. It is not a liquor produced in the Dominican Republic.

Instead of relying on a second-hand video from an unknown source, travFACTS spoke to a travel expert who recently sipped from a minibar or two in the Dominican Republic. Susan Collins-Peavy, the owner of Massachusetts-based Susan Peavey Travel, was in the destination in June and again in August.

“Did I drink from the mini-bar? Absolutely,” said Collins-Peavy about her stay at Casa de Campo on June 20. “There was an assortment of cold beverages from bottled water to beer, to soda. All were sealed. There was a nice bottle of wine in my room too, again, sealed by a cork.”

The Centers for Disease Control and Prevention’s (CDC) last advisory to travelers heading to the Dominican Republic warned of the risk of rabies from cat and dog bites. Neither the CDC or the FBI have issued any warnings in regard to tainted alcohol, despite investigations dating back to May.

Currently, the U.S. State Department shows the Dominican Republic at a level 2 advisory, which is the same as other Caribbean hot spots, Jamaica, Turks and Caicos, Trinidad and Tobago, the Bahamas and Cuba. This level 2 advisory has been in place since April, and hasn’t changed, despite the negative reporting.