travFACTS’ mission is to expose exaggerated or flat out misleading travel “news” that is consistently put out by media outlets. A June 19th People article featuring a headline claiming something “very strange” is going on in the Dominican Republic only attempts to validate this statement by interviewing one person who is not a travel expert, FBI member or representative of the Centers for Disease Control and Prevention’s (CDC). 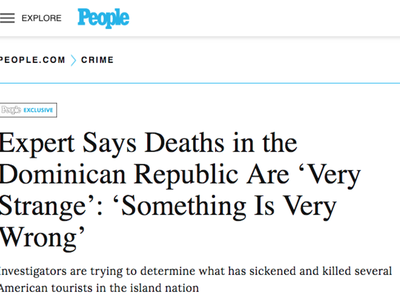 Headline: Expert Says Deaths in the Dominican Republic Are ‘Very Strange’: ‘Something Is Very Wrong’

Deck: Investigators are trying to determine what has sickened and killed several American tourists in the island nation

Reynold A. Panettieri, Jr., a physician at Rutgers University who specializes in toxicology and is not directly involved in the investigations, is People’s lone “expert” in the story. The story offers no insights from any security experts, hotel representatives in charge of food and beverage services, or travel experts.

The story merely relies on this physician to confirm whether it is possible for a drink to be tampered with but offers no evidence.

According to the article, “Several people fell ill after taking a drink from their hotel minibar, leading some to believe that tainted alcohol could be the culprit. ‘It is possible for drinks from the minibar to contain a toxin,” speculates Panettieri, ‘so if that’s the common denominator, that’s always a possibility.’”

A possibility? There are a lot of possibilities, so why only focus on this one?

The article also implies that the U.S. State Department has confirmed that the deaths in the Dominican Republic this year are linked by reporting, “The U.S. State Department has confirmed it is investigating the deaths of at least six American tourists in the Dominican Republic since the summer of 2018. Some of them died in what appeared to be bizarre — and similar — circumstances. The agencies are not yet releasing further details about the investigations.”

In between the facts that the U.S. State Department is investigating the deaths and that further details have not been announced, the author sneaks in his own opinion that some tourists “died in what appeared to be bizarre — and similar — circumstances.”

Neither the CDC or the FBI have issued warnings about a health hazard in hotel minibars, despite investigations dating back to May.

She told travFACTS she had beverages at 26 different properties in the Dominican Republic, at the airport and during transfers in the last two months and didn’t experience any illness.

“I’m not sure why it is sensationalized like it is/was,” said Chaffer. “Even with the Mexico alcohol issues, it was primarily one journalist who kept on it. It was not national news like this was.”

Americans are more likely to be killed in a homicide in the U.S. than die of unnatural causes in the Dominican Republic, according to U.S. State Department statistics reported by CNN.

“The stats, looking at deaths of tourists in Ireland last year, which are higher than D.R., wasn't covered on the news,” said Chaffer. “I don't want to get political, but I do feel it's come from a backlash on something there. Honestly, there's no reason for the scrutiny as compared to other Caribbean islands.”

There has been zero proof that the deaths in the Dominican Republic this year are connected. There are some commonalities between some of the victims, but there have been no toxicology reports released yet.