travFACTS’ mission is to expose exaggerated or flat out misleading travel “news” that is consistently put out by media outlets. The June 24th International Business Times article proclaims in the headline that the deaths in the Dominican Republic this year “could be linked to alcohol.”

But the story neither proves that alcohol was the culprit or that the deaths are even linked to begin with. 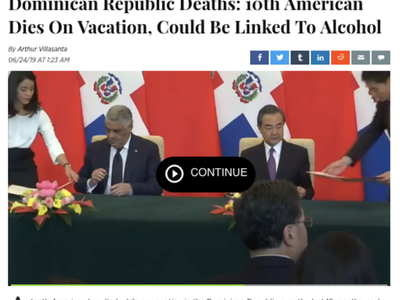 “Could be” are always dangerous words to include in a headline, but what makes this title especially irresponsible is its two-fold attempt to both blame alcohol for the deaths, while also suggesting these deaths are linked without providing any evidence.

According to the article, “Three of the deaths, however, seem to be linked to victims taking a drink from their room’s minibar.”

Using an open-ended word like “seem” only adds to the speculation. travFACTS can just as easily argue that it seems like this is not a destination-wide problem as this story suggests. After all, if this was an issue of every Dominican Republic resort, wouldn’t we see way more cases than three?

The article gives the reader the impression that people are getting sick at minibars across the country when, in fact, only a few hotels have been mentioned by name in the reported incidents.

Lastly, the article flat out admits there is no proof that any of these deaths are linked.

According to the article, “U.S. officials also haven’t said the deaths are connected but teams from the U.S. Centers for Disease Control and Prevention (CDC) and the FBI are at the Dominican Republic investigating the deaths.”

There has been zero proof that the deaths in the Dominican Republic this year are connected. There are some commonalities between some of the victims, but there has been no toxicology reports released yet nor any warning of tainted alcohol issued by the FBI or the Centers for Disease Control and Prevention (CDC).

Americans are more likely to be killed in a homicide in the U.S. than die of unnatural causes in the Dominican Republic, according to U.S. State Department statistics reported by CNN.

But If the numbers along with the State Department, FBI and CDC's lack of immediate response and warning to travelers isn't enough to reassure you that the Dominican Republic remains a safe destination, consider talking to a travel agent.

travFACTS spoke with Tom Varghese, owner of Travel Tom in Washington, D.C. about clients he recently sent to Hard Rock Hotel & Casino Punta Cana, one of the few hotels that have been mentioned by name in the reported incidents.

"We just had a destination wedding at the Hard Rock Punta Cana with almost 100 guests,” he said. “When they got back, the bride said the couple and all their guests had an amazing time. They all ate, drank, partied hard and would not hesitate to return.”