Headline: Is There A Link Between American Tourists' Deaths And Minibars In The Dominican Republic?

Deck: What is happening in the Dominican Republic?

travFACTS’ mission is to expose exaggerated or flat out misleading travel “news” that is consistently put out by media outlets. The June 19th BuzzFeed article featuring a headline that begs the question, “Is There A Link Between American Tourists' Deaths And Minibars In The Dominican Republic?”, is just one example of today’s clickbait journalism. 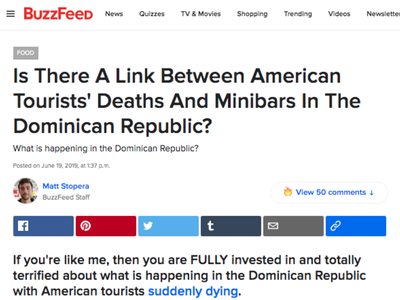 It starts with the headline, by asking a question instead of reporting facts. It continues with statements like the following: “Three out of nine American tourists who have died in the Dominican Republic in the past year had a drink from their minibar.”

Different resorts, owned by different companies, staffed by different employees and spread throughout the country are tied together around the idea that there’s a common thread; killer minibars.

Some of the resorts in question have almost 2,000 rooms and accommodate over 4,000 guests a night, yet news organizations never question how there could be a connection. It is “reporting” run amok.

Buzzfeed attempts to build a case for their poisoned mini-bar theory by displaying a photo of what it deems to be a suitable refrigerator display with the words, “Now, I don't know about you, but when I think of a minibar I think of this.”

The story then features a photo of a slightly disheveled minibar with the words, “But that's not what these minibars look like in some of these resorts.”

What do they mean by this comparison? If a bottle is tipped over in a small refrigerator, does this somehow mean that it’s unsafe to have a drink from it? That appears to be what the writer is aiming for, but the story’s conclusion, in the writer’s own words, seemingly negates the case they were just attempting to make:

“BASICALLY, this ‘bootleg alcohol theory’ is just that, a theory. We are still missing a lot of answers in this story.”

A theory? That’s what this story is about. No facts, no evidence, no real journalism. Just hype, innuendo and a so-called ‘theory’.

The headline asks a question in the hopes that it drives a click that will lead the reader to an answer. At the same time, it automatically puts a certain conclusion in the reader’s mind.

The story never gives you an answer, other than to state that their stated headline is simply a theory. Indeed, the author’s own words deserve repeating:

“BASICALLY, this ‘bootleg alcohol theory’ is just that, a theory. We are still missing a lot of answers in this story.”

Currently, the U.S. State Department shows the Dominican Republic at a level 2 advisory, which is the same as other Caribbean hot spots, Jamaica, Turks and Caicos, Trinidad and Tobago, the Bahamas and Cuba. This level 2 advisory has been in place since April and hasn’t changed, despite the negative reporting. What does the State Department know that these reporters don’t know, or don’t care to know?

While the Caribbean hotspot saw a sizable 7.9 percent increase in U.S. visitors between 2017 and 2018, the number of Americans who died of unnatural causes in the Dominican Republic dropped from 17 in 2017 to 13 in 2018.